Working towards a new exhibition is always challenging. I recently joined a group of  contemporary artists called Artel, all of us based in, or near the city of Chichester in the UK. The theme is Transience. This started a train of thought that began with my passion for the natural world. One of the most transient aspects for me is the sky. Skies change as you look at them, colours and cloud formations drift, move, merge, disappear. The light changes constantly, and the winds create rhythmic patterns that dance and swirl, offering endless possibilities that are perfect for abstracting and experimenting.

Capturing moments in time like this with a sewing machine is not easy. Over a period of months I made notes or quick sketches that were no more than a series of hasty lines. I took photos to help me remember colours, although these were soon ignored as ideas began to form. I NEVER work directly from a photo but use them as aides-memoire. Here are some pieces. They are small compared to my usual works, between 4-6 inches square, (10-16 cms) but who knows, maybe they will lead onto larger pieces later this year.

The first image is from a sunset, and the second a late afternoon sky 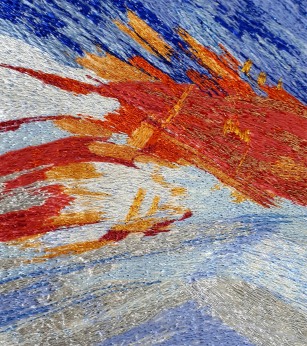 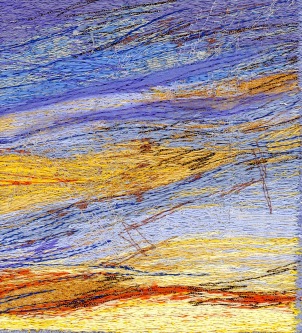 This is a drawing/collage from my sketchbook. It has helped me make decisions, although it’s not been used as a direct starting point as I had intended to make a much larger piece, but a broken wrist got in the way! 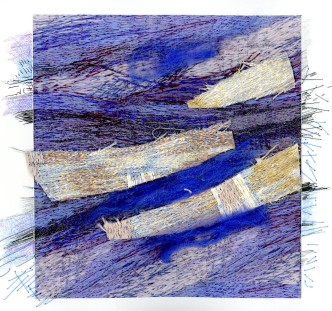 and finally an explosion of gold and blues influenced by the collage above- I think I like it best so far! Your comments would be interesting and helpful. 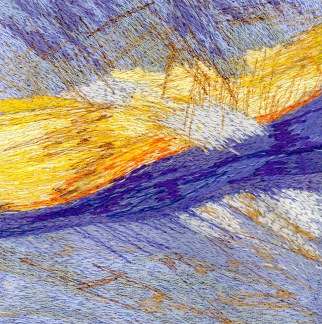