With over 35 years of sketchbooks in my studio I decided to look back to see what I was doing at various times during my career. It has been somewhat revelatory! I drew differently, often more boldly, without holding back, used a wider variety of media, and  frequently explored ideas that I thought I could use with my students. Back in the 80s with a fulltime lecturing post and a young family, I did make my own work, and had several exhibitions in the south of England, but I have no real record of those in visual terms. Do take a look at my drawings and ideas from the 1980s. You might be as surprised as I was!

This is from 1986. I photocopied some images, including pieces by Henry Moore, cut fragments up, pasted them down, then drew freely from them, inventing a surreal landscape. It was an exercise I did quite often, I found several in different books during this decade. I did quite a lot of mono printing and also batik at this time.

Here’s a more formal drawing from 1983 and its one of the few drawings I remember doing. On a field trip with students to Florence and Venice, on a cold, rainy March day, I sat in the Duomo in St Marks Square, and drew what was in front of me. You can see the date in the bottom lefthand corner. Its bolder and more direct compared to my current architectural studies and stays in the memory far longer than a photo! 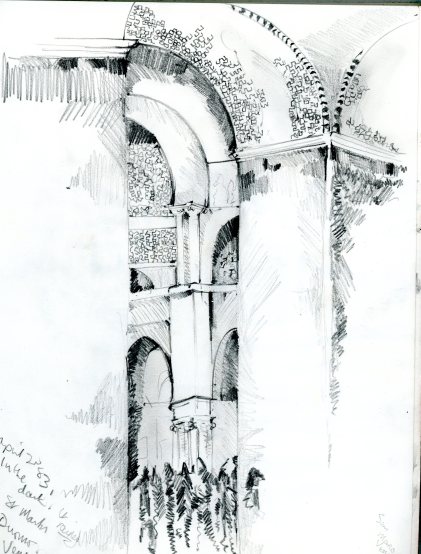 The following mixed media piece shows me playing with pastels and pencils, thinking about land and sea in an abstract way. Its dated 1986. I did a lot of papermaking at this time, and this would have been part of my thought processes. I rather like it!

We spent several years as a family on a gite in France in Brittany. Here’s a drawing I’d totally forgotten, of the lake at Le Lendu. 1987 Pencil, pen and pastel

and finally, from my 1989 sketchbook, an abstracted drawing from a friend’s garden using pastels. Now I’m thinking I need to look at these again and start stitching from them! More to follow in my next post–