It’s been a busy few weeks for me with some great promotion. Firstly my first spread in an Australian magazine, TFF (Textile Fibre Forum) #122 June 16, which shows the way in which my work has changed and progressed over 40 years of making and exhibiting, and then a piece from the wonderful Diana Springall collection of contemporary embroidery was featured and discussed on “MAKE! Craft Britain”, an hour long programme presented by Martha Kearney, on mainstream UK TV BBC4 June 9th 2016. This foray into the world of stitching set about de-bunking the theory that embroidery is craft  rather than art, and Diana eloquently explained why  Britain is still at the fore of embroidery. From the mid 1950s art schools taught  embroidery students alongside the painters and sculptors. Students had to draw, and had to acquire the same skills as well as heir own technical expertise, and I was lucky enough to study at Goldsmiths Art School in the mid-late 60s in this way. Drawing has been fundamental to my own personal progress in textile art, and I have all my sketchbooks since 1980 in my studio, a permanent  reference library, as well as a visual diary. 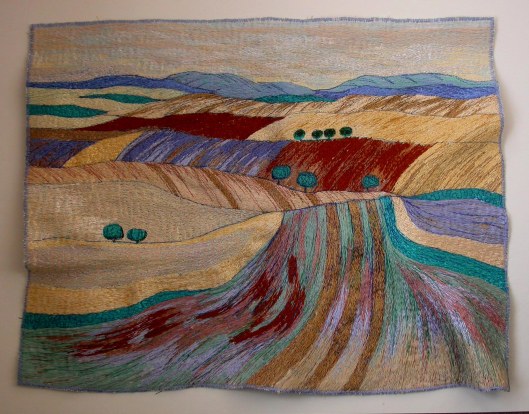 and here one of my many drawings